The Washington State University College of Nursing has transformed nursing education, producing exceptional graduates at every level of the nursing profession. The same spirit of innovation will carry us into our next half-century.

About 50 people – from area colleges and universities, hospitals and professional groups – meet in the Davenport Hotel in Spokane to explore the idea of starting a bachelor’s degree program in nursing in Eastern Washington.

Did you know…
In 1966 Betty Harrington, chairman of the committee, wrote to Bing Crosby to ask for a donation to help pay for a $15,000 feasibility study. He politely declined via his brother Larry Crosby. 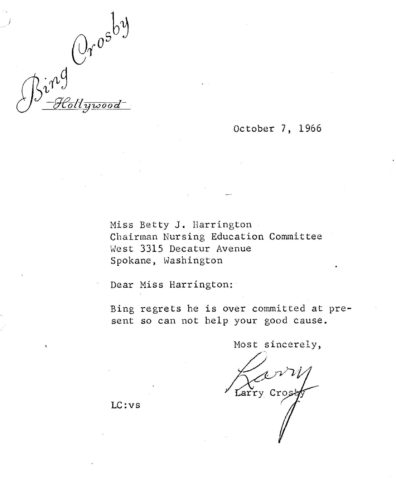 A committee leading efforts to create an intercollegiate nursing program invites Mrs. Lulu Hassenplug, founding dean of the UCLA School of Nursing, to Spokane to consult on the idea. She proclaims it “a creative and realistic approach.” 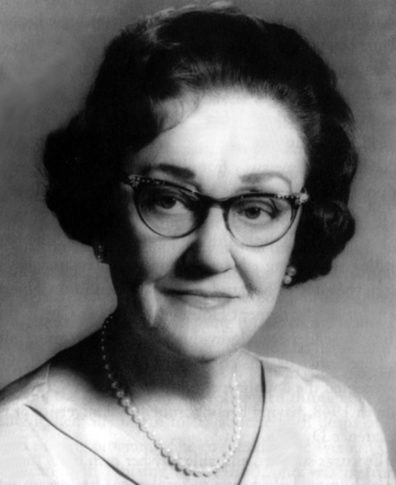 The Intercollegiate Baccalaureate Program in Nursing is officially established July 1.

Did you know…
Female students were required to wear a pink-and-white uniform. Also required: a full-length slip, white low-heeled shoes and white hose (pantyhose style preferred, rather than stockings). Male students were required to wear white trousers, shoes and socks with a white uniform jacket. Men were not allowed to have beards, though mustaches were OK.

The nursing program’s first home is the 1904-era Carnegie Library at the west end of downtown Spokane. Space is tight, and the program eventually spreads to two annexes – the Simchuk’s Sporting Goods building (now occupied by the Rocket Bakery) and an elementary school west of the building.

The center almost immediately focuses on recruiting and retaining nursing students from minority groups, devoting half of a faculty member’s time to minority student affairs.

The faculty commits ICNE to prepare nurses to practice in rural and small community settings.

ICNE is accredited by the National League for Nursing, retroactive eight months. So students who graduated in 1971, 1972 and 1973 came from an unaccredited program. That doesn’t cause much trouble for students who want to work in Washington, but some have difficulty getting positions, especially in the military.

Built at a cost of $5.76 million, the 59,000-square-foot Warren G. Magnuson Intercollegiate Nursing Building opens on a 13-acre site across from Spokane Falls Community College.

Did you know…
The architectural firm of Walker, McGough, Foltz, and Lyerla designed the Magnuson building. The same firm – now called Integrus Architecture – also designed Spokane’s Opera House-Convention Center, St. Luke’s Hospital and was one of the designers of the WSU College of Nursing’s current building on the WSU Health Sciences Spokane campus. Integrus Architecture is currently headquartered in the College of Nursing’s first home, the former Carnegie Library.

Did you know…
Sen. Warren G. Magnuson – known as Maggie – was the chairman of the powerful Senate Appropriations Committee, and it was his influence that brought money for the new nursing facility to Spokane

ICNE Yakima is established as an extended campus, housed in a cottage near Yakima Valley Community College.

Did you know…
Class lectures were recorded on videotape in Spokane and shipped to Yakima, enabling the expansion of the nursing program there. Due to mailing time, classes in Yakima were always a week behind their Spokane counterparts.

Fort Wright College closes, and its participation in the intercollegiate nursing center ends.

WSU’s new branch campuses open in the Tri-Cities and Vancouver, and both sites are committed to offering nursing programs.

WSU has advanced its technological capabilities and begins offering a two-way television network (WHETS) where classes are viewed by the college’s nursing sites outside of Spokane. Because it’s a microwave system, however, transmissions can be interrupted by snow or ice.

The Washington Legislature appropriates $3.5 million to build a new facility in Yakima.

Gonzaga University joins the ICNE consortium, and remains a member until it opts out in 2006 to launch its own Bachelor of Science in Nursing program.

The People’s Clinic is launched to provide primary care for low-income people. Staffed by college faculty and students, the clinic serves more than 3,000 people a year until it’s forced to close in 2009 after the loss of a key grant.

The Washington Legislature gives WSU funds to design a new College of Nursing on the Riverpoint Campus in downtown Spokane, after a decade of requests. The Legislature appropriates the money for construction in 2005.

Ground is broken for the new building on what was then called the WSU Riverpoint Campus.

A PhD in Nursing is added to the program mix.

The school becomes the WSU College of Nursing, which has been part of its official name for a decade.

The $34.6 million, 88,000-square-foot nursing building at WSU Spokane formally opens. Though it is built with state money, the federal government kicks in nearly $2.5 million to fund technology for distance education and simulation.

WSU’s Board of Regents officially designate WSU Spokane as the university’s health sciences campus. The College of Pharmacy and Pharmaceutical Sciences and the new Elson S. Floyd College of Medicine eventually join the nursing program on the campus.

Did you know…
Until Expo ’74, the area now occupied by WSU Health Sciences Spokane campus was a maze of railroad tracks and warehouses. The building that’s now the Center for Clinical Research and Simulation began life in 1938 as a Montgomery Ward warehouse.

The college is one of 10 nursing schools nationwide selected to participate in the National Simulation Study commissioned by the National Council of State Boards of Nursing. The study is designed to give insight into how much simulation can be incorporated into a nursing education. WSU’s participation also helps the college become a national leader in using simulation as a learning tool.

A Doctor of Nursing Practice (DNP) degree is introduced in Vancouver and Spokane. The DNP is a clinically focused doctorate, versus the research-focused PhD.

Did you know…
The American Association of Colleges of Nursing recommended in 2004 that nurse practitioners have a doctorate degree (DNP) versus a master’s degree. Part of the reasoning was to match other health care professions in requiring a practice doctorate.

The WSU College of Nursing is honored by the National League for Nursing as a Center of Excellence in nursing education, one of 15 programs recognized that year nationwide.

The WSU College of Nursing kicks off a year-long celebration of its 50th anniversary at the Cleveland Visiting Scholar event.