As published in Northwest Crimson & Gray, a magazine of WSU Vancouver

Helping get a hospital built in Uganda was an important step for Anita Hunter. But it was just the first step.

More than 10 years ago, Anita Hunter was invited to Mbarara, Uganda, to build a children’s hospital that would treat children who were dying from preventable diseases. Thanks to many people, the hospital was built and has been operating since 2009.

But Hunter’s interest didn’t stop there. Too many children still had preventable diseases. “Our work has gone beyond building a hospital to cure illnesses. We need to prevent them,” said Hunter, a clinical professor and associate dean of academic affairs and accreditation for WSU’s College of Nursing. She has offices on both the Vancouver and Spokane campuses.

Looking beyond the hospital, Hunter and her science colleagues from the University of San Diego began conducting community assessments, environmental and water quality assessments, and population health assessments to identify how environment and health interacted to affect each other.

Hunter joined WSU Vancouver in 2013, bringing her research along, although most of those working on the project are in San Diego and Mbarara.

Some 80 percent of the country in Uganda has no access to clean water. People draw water for drinking and cooking from ground water sources, such as streams, swamps and boreholes. The Ugandan government does supply clean water to 20 percent of the country. Unfortunately, as global warming has led to diminished rainfall in the country, the underground aquifers supplying most Ugandans’ water bubble up through lava, which contaminates the water with arsenic and other trace metals, such as lead, cadmium, fluoride and selenium. These metals contribute to significant health consequences, including cancers, cardiac and severe neurological disease in adults, and developmental and cognitive delays in children.

“That began to give us an explanation for some of the unusual physical symptoms people were demonstrating, particularly neurological symptoms,” Hunter said. “Adults who were 25 or 30 years old were having memory issues, chronic headaches and mobility problems, whereas children were having cognitive and fine motor developmental issues that could not be explained by malnutrition, hospitalizations for illnesses, malaria or prematurity.”

To find those who were being harmed by contaminated water, Hunter wanted to conduct a broader study to test the physical and developmental health of mothers and children in the district. In 2015, she received a faculty mini-grant from WSU Vancouver. The grants are awarded as seed money for projects that will lead to requests for external funding. With those funds, she could pay for research materials for two trips to Uganda in 2016, in January and July.

During those trips, Hunter and her colleagues assessed 498 women and children in six villages—about half with access to clean government water and half without—to determine whether contaminants were making them sick. In two of the villages without access to government filtration, the water drawn from the ground was grossly contaminated with trace metals.

“In those two villages with grossly contaminated water, 100 percent of the population of women and children were spilling trace metals in their urine,” Hunter said. “All were testing positive.” The women, with an average age of 28, were three times likelier than those with clean water to suffer from cardiac problems and irreversible neurological problems, such as memory loss, unsteady gait and chronic headache. They also faced three times greater risk of pregnancy loss, low birthweight, prematurity, and neonatal loss or death of their babies within the first two weeks of life.

Children exposed to the same water were suffering too. “Children from birth through age 5 were 10 times more likely to have developmental delays, especially in speech, language and fine motor skills, than the children in villages with access to clean water,” Hunter said. “Those ages 5 to 14 were 30 times more likely to have cognitive delays, functioning one to two age levels below expected cognitive processing.”

And that was just 498 people in six villages. Translate that to the entire Ugandan population, Hunter said, “there is potential for more than 3 million children to be affected and more than 4 million women to have pregnancy health issues.”

At each stage of the research, the most daunting challenge has been funding. The Holy Innocent Children’s Hospital, which opened in 2009, was built with funds raised largely from members of the Church of San Rafael in San Diego. Other hospitals in the United States and Europe donated modern medical supplies. Members of the research team have often shouldered most of the cost for their trips to Uganda.

For Hunter and her colleagues, the issue is urgent and alarming. What is happening to the people in Uganda with contaminated ground water that is exposed to lava rock layers can be transposed to the United States, where such ground water sources are also prevalent, as in Washington, Oregon, the Northeast and Southwest regions, she said.

They have submitted their findings for publication, and have presented their work to international and national research conferences for nursing, environmental health and water quality. Recently they have been in conversation with Africom, a United States Africa Command Armed Forces group responsible for U.S. military relations with 53 African nations. Disseminating information about the environmental contamination in Uganda to other African nations and putting into place affordable and meaningful interventions is the intended outcome of this potential collaboration with Africom. “What we are finding in Uganda extends all along the Eastern African rift that extends from Ethiopia, through Kenya, Uganda, Rwanda and Tanzania. There are also rifts in the southern hemisphere and western hemispheres of Africa” Hunter said.

Meanwhile, the team is working to educate affected people. “We couldn’t just find these problems and not do something about it,” Hunter said.

For example, green leafy vegetables, such as spinach, kale and broccoli, as well as eggs can help a person absorb and excrete trace metals. Water can be boiled to remove bacteria and parasitic contamination; orange peels or banana peels can be placed in clean water for 15 minutes and then removed, thus absorbing most of the trace metals in that water and making it fit to drink. It is not perfect, but “there would be significantly less intake of trace metals than if you’d not done any of that,” Hunter said. 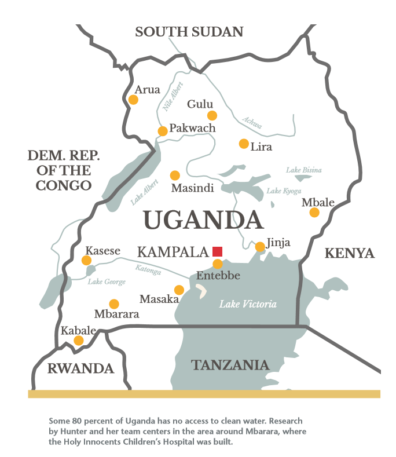 Getting people to change their practices is not easy, of course. “It has been scary for the people to hear what we are finding in their water and how it is affecting them,” Hunter said, “and a lot of people say their forefathers have been drinking this water, so how come it is dangerous for us now. Our best response has been that, yes, it’s from the same source, but it’s not the same water.”

A team of four nurses, headed by Stephanie Gardiner, a WSU DNP-FNP student from Vancouver who went with Hunter earlier, and a team of 14 environmental science/chemistry students from University of San Diego, traveled to Uganda in January 2017 to continue the public health education and further test the water sources. Their findings will be important as the projected work with Africom develops and proposals for funding are created.

“When you start doing projects, you must look at their impact on the population,” Hunter said. “Is the outcome going to be positive or negative? If positive, such as the original concept of building a children’s hospital, how do you build upon it and keep it sustainable by the people? If it is potentially negative, such as the water quality assessment that found the toxins, then what revisions need to be made to the original idea so that a more positive outcome is possible?  Building rainwater collection systems and the nutrition education were feasible interventions which can be carried forward by the people. Researchers and interventionist will not be there forever, so it is critical to teach the people how to care for themselves.”