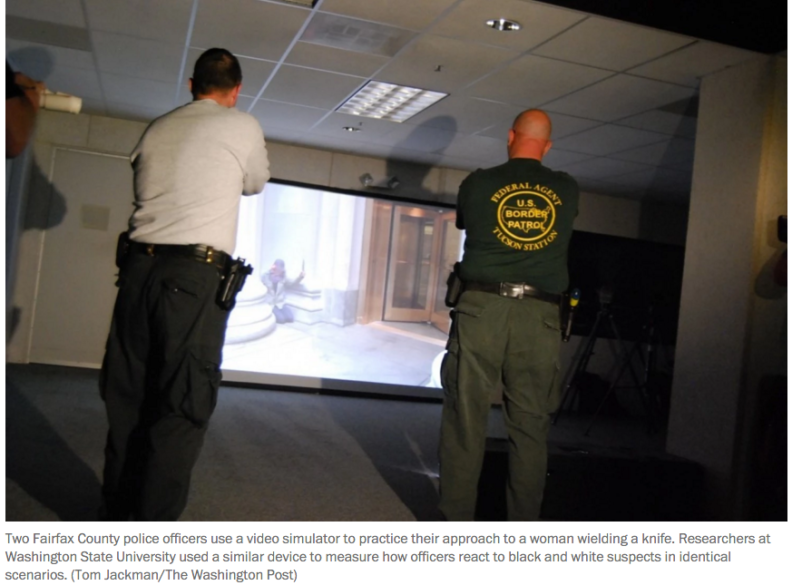 Originally Published by Tom Jackman on April 27, 2016 in the Washington Post

The conventional thinking about police-involved shootings, and some scientific research, has been that black suspects are more likely to be shot than white suspects because of an implicit racial bias among police officers. But now a new study has found exactly the opposite: even with white officers who do have racial biases, officers are three times less likely to shoot unarmed black suspects than unarmed white suspects.

The results come from a laboratory project at Washington State University using highly realistic police simulators, in which actors in various scenarios approach and respond to officers on large, high-definition video screens in an attempt to recreate critical situations on the street. The officers are equipped with real guns, modified to fire infrared beams rather than bullets, and the scenarios can branch into conflict or cooperation, depending on the officers’ words and actions.

It’s the third time researchers at Washington State — Lois James, Stephen M. James and Bryan J. Vila — have set up simulations to monitor the differing reactions of police when confronted by white or black suspects. And all three times, they found that officers took significantly more time to fire their weapons if the subject was black, according to their latest report, “The Reverse Racism Effect,” to be published in the journal Criminology & Public Policy.

It’s a complex subject, dating back to a 1974 study which concluded that “the police have one trigger finger for whites and another for blacks.” A 1978 report found that 60 percent of black suspects shot by the police carried handguns, compared with 35 percent of white suspects. In 2001, a statistical study showed that black people comprised 12 percent of the population but committed 43 percent of the killings of officers.

But there has also been a contrary narrative, that officers are hesitant to fire at black suspects, starting with a 1977 analysis of reports from major metropolitan departments which found officers fired more shots at white suspects than at black suspects, possibly because of “public sentiment concerning treatment of blacks.” And in 2004, David Klinger at the University of Missouri-St. Louis interviewed more than 100 officers and found “evidence of increased wariness about using deadly force against black suspects for fear of how it would be perceived and the associated consequences.”

Into this conflict of views enters Lois James at Washington State, who has made studying the race factor in police shootings a specialty. For the most part, simply using data from police reports doesn’t include the episodes where an officer doesn’t shoot or doesn’t hit a target. So she has turned to the lab to try to simulate the circumstances officers face on the job, keeping all the factors identical within a scenario — type of weapon, body language and spoken threats, clothes, surroundings — except the race of the suspect.

In two previous tests using police simulators, James monitored the neurophysiological reactions, such as brain waves, of both police officers and civilians to deadly encounters. She said in an interview Tuesday that she found that “the participants were experiencing a greater threat response when faced with African Americans instead of white or Hispanic suspects.” But even with that response, in both studies the police and non-police participants were “significantly slower to shoot armed black suspects than armed white suspects, and significantly less likely to mistakenly shoot unarmed black suspects than unarmed white suspects.”

For the new study, James enlisted 80 patrol officers from the Spokane Police Department, which handles a city of about 250,000. The participants were almost all white (76 of 80) and nearly all male (71), which James said was reflective of the Spokane department, and they had an average age of 40 and experience of more than 14 years. The officers came into the lab on four occasions between August 2012 and November 2013, before the uproar ignited by police shootings in Ferguson, Mo., and elsewhere in 2014. On each day, they would face six scenarios, involving both armed and unarmed suspects who were both black and white. A total of more than 1,500 scenarios were recorded. The officers were not told the reason for the tests nor was any mention made of race, they wore full uniforms to enhance the realism, and they were paid for their time.

In addition, for this study the officers were given a battery of written and oral tests. Again, there was no mention of a racial component. But one of the tests was the Harvard Implicit Association Test, designed to detect racial bias by linking pictures of black and white faces with pictures of weapons. Perhaps stunningly, 96 percent of the nearly all white officers demonstrated implicit racial bias, with 78 percent strongly or moderately associating blacks with weapons, and zero percent associating whites with weapons. So that’s the baseline test group for the study.

This is particularly notable because “our police participants demonstrated strong implicit bias associating black suspects with weapons,” James wrote. Still, the officers were “more hesitant and more careful in their decisions to shoot black suspects.” In effect, the officers “displayed a counter bias, or ‘reverse racism’ effect,” James said. “These findings call into question the validity of the widespread assumption that implicit racial bias is the cause of the disproportionate number of racial minorities in officer-involved shootings.”

But why? James’ team did not interview the Spokane officers. But she did not think that a 0.23 second delay in firing enabled the officers to consciously decide based on race. She considered whether the fact the officers knew they were being observed played into their actions, but she said the police did not know that race was a factor in the project. More likely, James concluded, was the reverse racism “rooted in people’s concerns about the social and legal consequences of shooting a member of a historically oppressed racial group…paired with the awareness of media backlash that follows an officer shooting a minority suspect.”

James cited one of Klinger’s interviews from 2004, where an officer said that, “The press always plays up the racial angle on shootings around here, and that used to affect my thinking about things.” The officer recounted a time where a black suspect was menacing others with a rifle, and the officer repeatedly warned the man to put down his gun or he would shoot the man in the back. “The whole time I was telling him I was going to shoot him, I was thinking, ‘They’ll crucify me on the news tomorrow if I shoot this black guy in the back.’”

James noted that her three studies have now tested a total of 116 police and 66 non-police participants, with the same results each time. She acknowledged that a video simulator is not the same as a live encounter, and that she had “limited diversity” from the Spokane police. But given that all three tests were performed before Ferguson, “this could represent a significant contribution to the literature on the impact of suspect race on actual deadly encounters,” the report concludes.

Here is “The Reverse Racism Effect:”